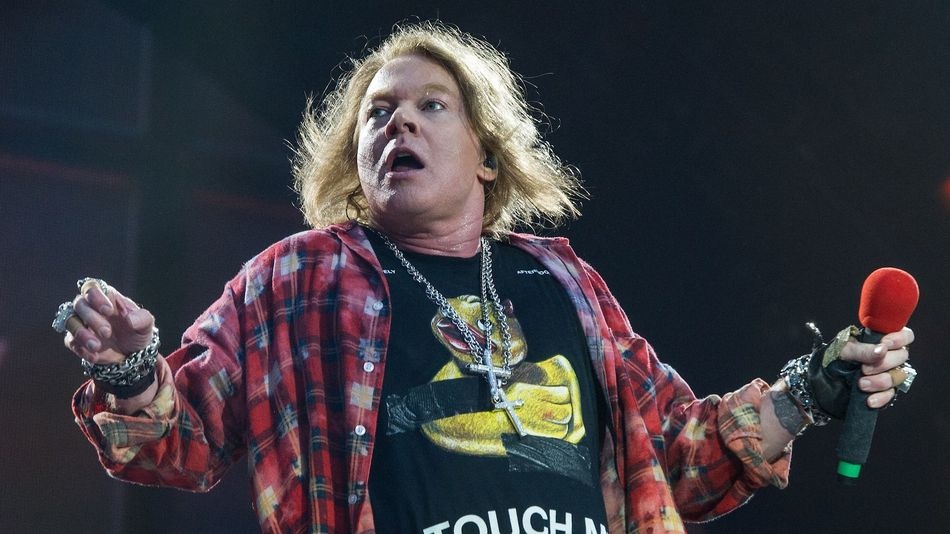 Let's talk seriously. I've been thinking this morning about some issues involving GNR, and another one of my favorite bands, Pearl Jam.
I have followed them both since always. The question that remains, is ... why Pearl Jam is getting more intense, more professional, dedicated to the fans, and the GNR is not?

Besides the most requested songs by the fans to be performed every time in a better way (including Ed's voice), the shows are very diverse and never equal ...

Not to mention that Pearl Jam has taken many steps beyond professionalism, even registering live cds of various tours ... having hundreds of live albums (and various DVDs) released in excellent quality.

The guys are together from the beginning (changing only the drummers) ... this shows a musical and personal cohesion that never existed in GNR.

Let's face it ... what does this tour have to do differently from the others we've done in the last few years? I answer: the safe and elegant bass, and the incredible Duff's presence on stage. it is.
The performances of Slash would not say that it still has brilliance or charisma.

Axl should have learned to be professional in the first place, and respect the fans more, second.
Examples such as Pearl Jam, or even Metallica, inspire people to like bands and Rock N 'Roll more and more.

Let's talk about ... this forum is too focused on illusions like leaks, and certain nonsense.
Let's talk about the reasons our favorite band swim, swim ... and die on the beach.

People who are inspired by PJ/Metallica, & not GnR, know fuck all about rock n roll.

If it's taken you until 2018 to realize & question the 'fan friendliness' differences between Pearl Jam/Eddie Vedder & Axl Rose/GnR then I'm at a loss for words.

Besides, Axl’s professionalism is beyond question & has, ironically, unquestionably sullied his legacy. Guy has been phoning in 3hour shows for the past 20years. His spirit has long been squashed by medication, lawyers or “professionalism”. He used to be a beacon & a role model, now he’s just a boring old fart like Elton john or Eddie vedder or stone Gossard or James or Kirk or lars. He’s lost his rock n roll attitude sadly. Maybe it still resides in him somewhere, that’s the only hope we have left. Otherwise if he’s been totally fucked then we’re all totally fucked. We’re hopeless!

The last rock star is probably/maybe already dead inside.

Apex twin is probably able to calculate precisely when the magic broke. Maybe it was around the time when Bucket was lost. I think apex posited the theory of the general helpedturning it into a well oiled touring machine as opposed to a project. But as to who is ultimately to blame well its prob down to a few factors.

Fact is of the matter is we’ve all lost a hero who is currently masquerading, presenting a facsimile. Sad but true..
We’ll always have that life time of Axl ‘85/6-‘02/3. He was heroic then. Full of bullshit professionalism now. A betrayal & an embarrassment to GnR is what he is these days.

John has the right idea here.  The energy and spirit left at some point.  Predictably really as you go through changes in your life.

Yeah good post John. I specifically liked the quote "turning it into a well oiled touring machine as opposed to a project". Never thought of it like that. I'd be curious peoples thoughts on the turning point moment. Maybe Ashba. Hate to give the guy any credit for anything but seems Axl just said "Fuck it" at that moment he took him on.

The question that remains, is ... why Pearl Jam is getting more intense, more professional, dedicated to the fans, and the GNR is not?

I don't want this to seem negative as I love GNR, but when I think of the band I often think of that disney pirate quote "Take All You Can and Give Nothing Back".

I think GNR are the priates of the music world. They were basically street dudes who made good.

They've always had that sort of attitude - In Slash's book he told of crashing vans for fun to see how many times Geffen would replace them, we know that the band used label negotiations as a way to dine out large for months with no intention of signing to any of them.

You see it over and over again in the history of the band - from their interactions with others to the disputes between each other.

I'm not saying they're not artists because they are - Axl is a top-list all time front man  and songwriter, Slash is the guitarist of his generation.

But at the same time they've always had a "fuck the world before it fucks you" mindset.

I wouldn't call it entitlement exactly (ironically that's what they accuse the fans of) but the GNR journey has always been about what they can get out of the deal. They like to make people happy as well I guess - but I think it's a secondary consideration.

The performances of Slash would not say that it still has brilliance or charisma.

I think Slash saved these shows and gave them the credibility they had.

I'm quite fond of bumble and the other guys - but it was really Slash back that made this the big reunion event it was - I like Duff - but Duff with Ashba and Axl singing as he did in 2017 would have just been a modest year like say 2013 or 2012 was.

Let's talk about the reasons our favorite band swim, swim ... and die on the beach.

For me I think the problems are:

1. Diagnosed or Not, and ok it's his personal business, but it's obvious from the public symptoms and testimony of others,  Axl has not always been in the best mental health. He had to take control of the band so as not to be fired for it - but history has shown the pressure of that has taken its toll over the years.

2. A lot of people in the music business are criminals - unfortunately this interacts with Axl's situation so that he gets less trustful, more paranoid, and then acts in ways that self-harm in order to punish people who tried to screw him.

3. The pirate mentality I mentioned above. Maybe it's rock and roll mentality I dunno. But they will feed the fans only after they eat first, and they're pretty hungry. A good example of this is no reunion album. They didn't need to do one to sell out. So they didn't. Other bands would do it for the desire to do it alone...but GNR is about what they can take...and it wasn't needed.

I hate to sound that cynical cos I do love the band and the music, but as they say "it is what it is" and that's how it seems to be - after being a fan for something like 28 years now.

We can try to reflect on what happens, but we always end up without a conclusion. We can only speculate why we do not have the most important man's information. I can only think, well, the most important musician that exists (for me) suffers from some problems and I just do not know exactly what they are, but I hope he can deal with them, I hope he is well.

It may seem like a lot of time wasted but I also like to think that although the band does not have many albums, the ones they have are excellent, all different and authentic, not the same, they are not treated.

And it's also cool to think that during all the years of isolation and few shows, Axl has created some things we can not even imagine. And the latter must be true, and if it were shown, it could make up for "every lost year."