The situation reminds me of the DJ Ashba conundrum.

Musically, he had the credentials to be a suitable replacement for Robin, and perhaps add an extra dimension in the studio should that ever be needed. However, his stage persona and style were awkward, ill fitted to the band and capable of inspiring derision from people even though he is talented and a cool guy.

Melissa is the same.

Musically she seems to be an accomplished musician, she can easily handle all pitmans effects triggering, her backing vocals add an extra dimension and in the event GNR ever decided to record something her production skills might be useful.

However, just like DJ, her onstage persona and personal style are at odds with the band's image and brand, and perhaps a bit like in Robin's 2001 alien look, it just comes across as out of place and awkward.

Musically she's fine, but her style and stage presence is from some other genre and watching it one tends to feel awkwardly embarrassed for the band. It's not so much that you even dislike her it's that you feel embarrassed for them that they went ahead like this. Much like when DJ mimicks Slash so blatantly.

I hope like how Robin came back in 2006 looking like he maybe could be in the band afterall, maybe in 2022 during the retirement tour by then Melissa will look and act less like she's running a jpop rave and more like she's in a rock band.

Melissa being in the band is no different when GNR added the back up singers and the horn section.  GNR have always had something like this once Axl started to get his way.

If the talent is there who cares what she looks like.  BH is the best guitarist GNR have ever had, yes better than slash and he wore a KFC bucket on his head. GNR fans need to stop worryign about image, that is something GNR was always against

If talent came first the band would actually release a new song, or hell, if the label is against it, perform one live.

The backup singers and horn section were never really considered part of the group to the media the way Melissa is.

What we are dong is simply playing the best of the bands catalogue, and 99% of that does not require anyone in the roll of pitman or melissa just like it didn't ever need a third guitarist. If we're creatively bankrupt and going to have a classic GNR tribute show it's not too much to ask that they don't make it look bizzare by adding in J pop, circus clowns, sports team rappers and yes KFC bucket wearing robots.

Bucket is talented in terms of his guitar ability no doubt, but his tenure amounted to almost nothing as he spent most of his time playing covers and while doing that playing open chords while watching Robin play the lead parts.

we're having an academical discussion here again, wow!
in my opinion, what matters is recording and releasing stuff. this band is doing zero off this for about 10 years already. so it doesn't really matter if they have pink clown on guitar, as long as the only thing they "produce" are profits off nostalgia touring.

Did you forget their glam days? 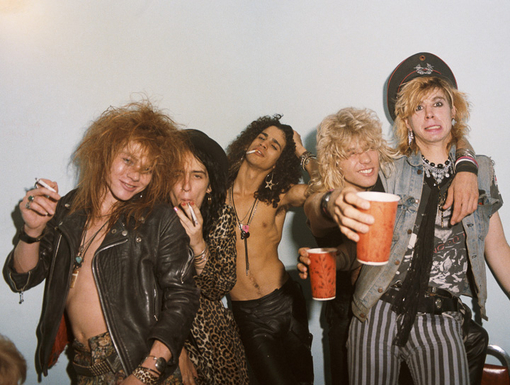 Even during their glam days, which were short lived, they were still a rock n roll band. Besides, every other rock band of the time was glam influenced too.

You can’t compare that to the freak show look in 2002.

And I’ll just add, how are they dressed again these days? Like a badass rock n roll band, except for the out of place J-pop chick....

they did it again 2 days ago at LA Staples Center, this time they also added Better remix.

She seems to be lipsyncing this time....

Besides that, I really think Axl should put some experimental work out of his system with Brain, Melissa and anyone else, release it as a solo project and refocus on Guns N' Roses with Slash and Duff shuffling around more traditional songs on the vault.