What are your favorite video games, old and new?

I mainly play older games: the original Diablo, Doom, Legacy of Kain, Quake, things like that

Most recent game I've bought was starwars lego Skywalker saga...haven't gotten too far into it yet

Ghost is a phenomenal game

Depends on the era:

Alien Isolation (again I love this game). GT5 (but in offline single player mode). All the Teltale Games. Batman Arkham games, Until Dawn.

Last game I played as a “gamer” when it was new was Metal Gear Solid 3.

My favourite old school arcade game was always 1942. I don't know why I just loved it but it had to be the sit down version. Fuck the standing version.

Super Tecmo Bowl is still one of the all time greatest sports games. It was the first realistic NFL game. It had all the real teams, rosters, and also allowed trades and entire seasons to be simulated. You also got 8 plays to choose from.

They were maxing out the system with that game. It required a next generation console to beat it.

That first Zelda game was insane. They were also maxing out the system with it. That game was huge....you needed a map from the game magazines at the time to navigate it.

Metroid was mind-blowing as well...so was the twist that the main character is a woman.

Contra was awesome...you needed that code that gave you 30 instead of only 3.

Gradius - Holy shit...this is what Defender(Arcade, Atari) wished it could've been.

Castlevania - One of the all time greatest games. Also had some of the best bosses.

Gauntlet - God I loved this game and it allowed you to play it without the need for a roll of quarters. Unfortunately I never passed it...but we got close. We made it to one of the levels where it's mostly those "black deaths" and disappearing walls. Insanity.

Speaking of the Tyson game...which was awesome....there was another boxing game on NES that was more intricate... tournaments, a point system, etc. I don't remember its name though.

There was a jet game on Sega that was killer. It wasn't like Afterburner...more in the style of River Raid. It's the only game I passed when borrowing a cousin's Sega.

Super Tecmo Bowl is still one of the all time greatest sports games. It was the first realistic NFL game. It had all the real teams, rosters, and also allowed trades and entire seasons to be simulated. You also got 8 plays to choose from.

They were maxing out the system with that game. It required a next generation console to beat it.

Castlevania - One of the all time greatest games. Also had some of the best bosses.

Castlevania is one I remember and if I recall I think it had an awesome "soundtrack" to it. I never really got into playing it though.  the other ones you mentioned I don't recall. One game I spent a lot of time playing was Dragon Warrior. Not sure anyone will remember that one. I feel like it was sorta of a poor man's Zelda in a way.

I also never played Super Tecmo Bowl. Just the original. As a Cowboys fan I hate to admit I always played as the 49ers. I was Ronnie Lott on defence and Roger Craig on offence.

Thinking about buying an original NES. I’ve played the new console with all the old games, which was nice, but it wasn’t the same. I loved Contra and Mike Tyson’s Punch Out.

Elden Ring was incredible. So was Red Dead Redemption 2 and GTA V

If you get a NES, definitely get Super Tecmo Bowl. It would still be playable even with the simplistic graphics.

When looking it up on YouTube, I saw they did one for Super Nintendo. Crazy...I do not remember that. Probably wasn't promoted. Football game I played during that generation of consoles was NFL 95.

I do remember one on PlayStation that looked terrible. Side scrolling football after NFL 94-95, Madden, Gameday, etc wasn't going to cut the mustard anymore.

Tecmo was a product of its time.

I was looking up Gauntlet and I finally get to see the final level. Wacky. Should've looked it up years ago. That level is much easier than the insanity that came before it...

I was trying to find one of the levels we got stuck on but don't remember the number or names. This screenshot is the closest I found... black deaths in every room.... 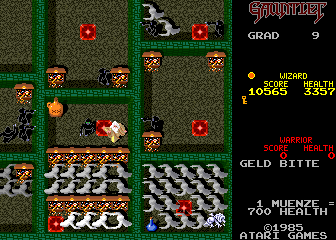