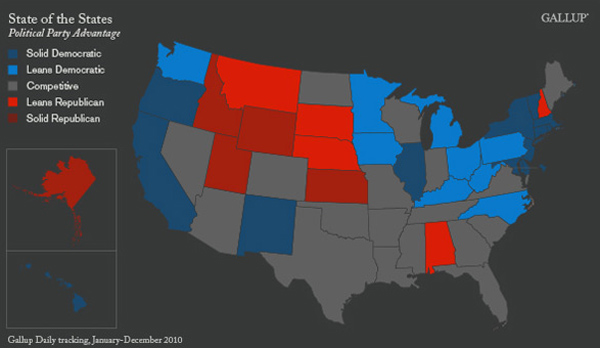 A new Gallup Poll finds fewer Americans self-identify as Democrats today than did in 2008. That's potentially bad news for President Obama's 2012 re-election bid, as many of the declines occurred in states he carried in 2008.

According to Gallup, in 2010 every state and the District of Columbia had fewer residents describing themselves as Democrats or identifying as independent voters who leaned Democratic. Some of the biggest declines occurred in swing states that helped Obama claim the presidency in 2008, including Nevada, New Hampshire, Wisconsin, Colorado and Indiana.

According to Gallup, a total of 12 states--including Tennessee, Virginia and Missouri--that were "solidly" or leaned Democratic in 2008 have now shifted to "competitive." At the same time, no states have moved in a more Democratic direction in the last three years.

In New Hampshire, a state Obama carried in '08, the number of voters identifying as Democrats dipped more than 11 percent--a turnover second only to Rhode Island, where Democratic identification declined just over 12 points.

But as Gallup notes, voters aren't exactly rushing to the GOP either. Rather, there are simply more competitive states ahead of 2012. And the news isn't entirely bad for Obama's party. According to Gallup, Democratic states still outnumbered Republican states by 23 to 10 in 2010, and there were 14 solidly Democratic states compared with 5 solidly GOP states.

I hate to put it this way, because i'm staunchly liberal on almost all social issues...

American is and always will be vastly pro-gun, anti-tax hike and anti-gay.

Thus - a Republican. The Democrats just don't appeal to the majority of the country outside of Cali and the Northeast. Only reason Obama caught fire, was he leaned moderate during the election, and didn't get "too black" with his campaign.

Sounds terrible, but it's horrifically true.

Solid point on fundraising, and a great post overall. Kudos.

You make a lot of good points about hypocrisy and ignorance in the American electorate. The worst one of all IMHO is the whining about "spending," but then the complainers cling to their entitlement programs. I am a fiscally conservative person so I can't help but laugh at the huge conflict in the polls.

Q: "How about we cut Social Security?"

They also forget about the job loss in the government sector too.

Cut spending, but keep in mind, those people have families and obligations too and they're gonna be out on their ass, simply because of a political belief.

Obama won because he raised more money on the campaign trail than McCain did. Nobody's ever won the presidency without winning the fundraising war. And I would say McCain's past as a moderate Republican cost him the support of hardcore partisan conservatives, which hurt his ability to raise money. Obama was able to get the far left excited (or more excited than they were for Hillary or John Edwards anyway) and so he got a lot of money, then when the nomination was secure he moved center well.

Any deep look at GSS data will depress you on Americans' political beliefs. 90% will say they believe free speech is essential, and then 70% will say that you shouldn't be allowed to say things that are racially offensive. Most people want spending cuts, most people don't want to cut anything if it's specifically listed. People like statism in practice but cling to libertarianism in principle. Then there's just weird things - like that pro-choice people are more likely to be anti-death penalty and pro-life people are more likely to be pro-death penalty. Abortion is also statistically a good predictor of preferences in environmental regulation, two issues with no obvious connection.

Labels like Democrat and Republican are just failing. People don't affiliate strongly with parties anymore. A huge section of Republicans hated Bush, tons on the left are upset with Obama and the democratic Congress from 06-10, so more and more people just call themselves 'independent'. People who self-identify as conservative have outnumbered self-identifying liberals 2:1 for quite a while, so I don't think shifts like these are surprising. Obviously Virginia was going to become Republican as soon as Democrats took power - their gubernatorial elections have resulted in the party opposite the President winning since Nixon.

People aren't happy with their government, the 'throw the bums out' mentality is always a major component of the electorate, and people blame the President, not Congress of their state governments, for their problems - whether they be unemployment, poor health coverage, draught, or bad weather on election day. Caring about politics isn't rational so it's hard to condemn people for their illogical and hypocritical political leanings.

EDIT: I want Gary Johnson to be President in 2012, just fyi

nice post...anything to do with American politics depresses me.:(

They also forget about the job loss in the government sector too.

Cut spending, but keep in mind, those people have families and obligations too and they're gonna be out on their ass, simply because of a political belief.

Speaking as an employee in the oil and gas industry, I know that feeling very well. There is a ton of ignorance about the energy industry, particularly about just how important it is to the daily functions of so many hypocritical environmentalists that still use computers, iPhones, and gas-guzzling cars. If you aren't living in the woods and you're preaching the destruction of the oil and gas industry, you are several things IMHO:

1. A huge hypocrite.
2. Extremely ungrateful.
3. Anti-American. Wiping out the oil and gas industry means wiping out MILLIONS of jobs in this country. It is one of the only industries that is actually kicking ass right now. This industry is hiring a ton of people every day who would otherwise be completely fucked. I know my own department has been growing a lot over the last couple years despite the tough economy. It is one of the only industries where our country actually PRODUCES something of value for the rest of the world. This isn't "house of cards" Wall Street type of stuff where you just bullshit your way to a fake net worth. Energy is crucial to civilization itself and its impact is measurable. The industry also hasn't been completely outsourced, unlike the manufacturing industry.

Sorry for the rant, it's just my perspective on things due to my livelihood being unfairly attacked all the time by politicians and the media. The assholes don't realize just how big of an impact this industry has on the economy, and I'm not just talking about the energy production itself. I'm talking about the jobs that are produced. People tend to forget that behind the "evil energy industry" caricature by politicians and media pundits, you have millions of honest Americans who just want to make a living. I'm not rich by any means and neither are my co-workers. None of us deserve to have our livelihood attacked the way it is on an ongoing basis.

Same thing with environmentalism. I can see where they are coming from, but coming from someone who grew up in a rural area, sometimes those jobs that impact the environment are the ONLY source of income for the entire area.

Without it, the communities become ghost towns.