i recently finished the untold story of alice in chains by david de sola. hell of a read! it's crazy how little information is documented about alice in chains online, in media or print. but this has just about everything... all in a single book.

it's especially bizarre compared to the amount of publicity guns n' roses gets. at least 1/8th of the internet is dedicated to either worshipping or shitting all over axl rose... yet layne staley is a name rarely mentioned. even his death received very little attention from the news outlets. it was eerily quiet. meanwhile, axl can tweet a string of smiley faces and it's viral within minutes.

throughout the book, there's several mentions of guns and members of the band. my favorite of which involves jerry attempting to hand axl a demo tape, back when guns was blowing up and alice was just getting started.

The summer of 1988 was an eventful one for Alice in Chains, for good and bad reasons. On June 1st, Iron Maiden was performing at the Seattle Center Coliseum with Guns N' Roses as the opening act. Jerry went to the show and handed Axl Rose a copy of the band's demo, who immediately threw it away as he as leaving.

notes: A cool homecoming show for Duff. Axl mentions that 'Sweet Child O' Mine' is their new video. Axl recounts playing the Gorilla Gardens a few years ago and they the best pot is in Seattle. He also says that he started writing 'Welcome To The Jungle' while he was in Seattle.'

as i was reading through the book, the amount of parallels between the 2 bands really stared dawning on me.

they both came from nothing, flirted with glam rock, blew up, did shitloads of drugs, went off the rails and imploded... all within a few short years. yet somehow they both survived the 90s and still exist today in some form or another.

the book mentions the metropolis club in seattle, where duff's band ten minute warning opened for the replacements in 1983. years later in 2016, as axl was re-launching new gn'r, duff actually briefly joined alice in chains... to play guitar. now there's some wacky perspective for ya. duff opened for a band whose bass player would later take his spot in his band... only to then briefly join a band who would later open his for band when he reunited with them and took his spot back from the guy he opened for back in the 80s. 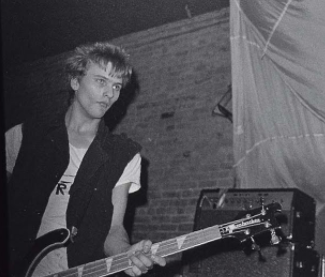 After [Alice in Chains] regrouped in spring 2006, Duff McKagan temporarily joined as a rhythm guitarist. While there was criticism about the band carrying on without Layne, McKagan was unapologetically for it. "These guys had to move on because they still had way too much to offer the rock-and-roll world. In an age of paint-by-numbers corporate rock, we fucking needed Alice in Chains!" he wrote in his memoir.

[To Duff] You jammed with us when we first got going again. You kinda helped us get our thing going. He was the fifth Beatle!" [laughs]

and it's get better. shortly after this, velvet revolved formed and the 2 bands toured together!

as far as axl goes, i'm not sure i've ever heard him mention anything about alice in chains or layne. i wonder if it was an alpha male thing? we know he was a huge fan of nirvana, soundgarden and grunge... but i can't recall him ever saying anything specific about alice. if you listen to the progression of how axl began approaching layering his vocals, i think it's pretty damn clear he's a fan of layne staley. the vocals on "angry chair" still blow me away every time i listen to it.

Layne's vocals on Angry Chair are massive, unusually so compared to anything else on the album or in the Alice in Chains catalog. The reason for this? "On the part where he's signing, 'Sitting on an angry chair... there's sixteen tracks of vocals going on there," engineer Bryan Carlstrom said. "All different harmonies, and multiple layers of harmonies. Maybe there's a harmony part and it's tripled, and another harmony part and it's tripled, and the lead part. It was crazy.

layne, however, just like axl, would run into difficulty with recording his vocals. while axl dealt with his own anxiety by procrastinating and doing stand-up comedy in the booth, layne had his own approach... usually involving drugs. guns, however, weren't the only band to bring in carpenters to augment the studio. layne, wanting total privacy while recording his vocals, had the staff build a soundproof wall in the studio so nobody could see him.

Inside the wall, Layne created a little shrine that, according to Calstrom, consisted of "candles and a picture of the Last Supper, and then a dead puppy in a jar." This is what he was looking at as he was recording his vocals for Dirt. Cosneros confirmed Carlstom's account, saying "It was scary back there. I tried not to go back there."

in 2016, alice in chains got another call to open for a semi-reunited guns for the first 5 shows of the not in this lifetime tour. i was lucky enough to be there for the detroit show at ford field. alice was fucking PHENOMENAL! i thought they were gonna blow guns away for a minute. then axl and slash got on stage and brought the house down. all in all one of the best shows i've been to in my life.

sometime around then, duff and jerry sat down to reflect on their past:

funny how the 2 bands have crossed paths over the years. you'd almost think they would have ran into each other even more. very similar stories in some regards... starkly different in others. one really cool thing about alice is that they managed to actually drop a record when the band was going through absolute hell and hitting rock bottom. alice's self-titled dropped at a time when layne was 3/4ths of the way dead and everyone was ready to kill each other. the result was some of the band's most interesting and exciting material ever. unlike guns, they managed to channel their negativity, self-destruction and hatred into actual music. others have said it before, but i really believe that a '96 guns record would have murdered anything that ever came to fruition in the chinese democracy sessions... but they were too busy with lawsuits, drama and paperwork.

after their bands broke up, both axl and layne turned to exile. when alice broke up, layne doubled-down on his addictions, bought a comfy little condo and played metal gear solid until he eventually obliterated himself with drugs. axl bought the biggest mansion on the biggest hill on the biggest side of down and spent the next 2 decades trying to re-create his childhood like he was michael jackson. layne grew weak, but released a song here and there... almost like he was trying to let everyone know he was still okay. axl packed on the pounds,  hibernated and goofed around with a single album. both are very fascinating reactions to your life blowing up in the public spotlight.

whatever the case, guns n' roses and alice in chains are 2 favorite bands in the world.

i recently finished the untold story of alice in chains by david de sola. hell of a read! it's crazy how little information is documented about alice in chains online, in media or print. but this has just about everything... all in a single book.

it's especially bizarre compared to the amount of publicity guns n' roses gets. at least 1/8th of the internet is dedicated to either worshipping or shitting all over axl rose... yet layne staley is a name rarely mentioned. even his death received very little attention from the news outlets. it was eerily quiet. meanwhile, axl can tweet a string of smiley faces and it's viral within minutes.

Yeah it is crazy...but AIC is to blame. Out of all the 90s bands that blew up, which band did the least amount of promo? AIC. They're probably lucky they got as big as they did. The music literally did the talking.

Layne's story has never been properly told and it probably never will. He checked out of reality and took a descent into madness years before he died and even close friends witnessed none of it.  The warning signs were always there. It's in his lyrics. The Mad Season album was practically a suicide note. Easily the most depressing album I've ever listened to.

Duff has always had a unique story. Change a few minor things in his life during the early-mid 80s, he doesn't make it in GNR but makes it during the grunge wave in one of those bands.

The Mad Season album was practically a suicide note. Easily the most depressing album I've ever listened to.

no kidding. "river of deceit" and "wake up" are brutal listens. layne is probably the rawest, most honest writer in rock n' roll history.

i guess that may be another reason why there isn't much coverage of the band. want to know the details of layne's heroin abuse from his own perspective? just listen to "junkhead". it's all there. no need for any additional article, story or biography.

bummer that alice isn't headed back to detroit. i definitely would have gone. still, that's a badass tour! can't wait to hear alice's new material. even without layne, you can't question jerry's songwriting or the band's ability to completely kick ass.

and that photo totally is tommy stinson. it's from that '83 show. i grabbed it from a book on google about the replacements. 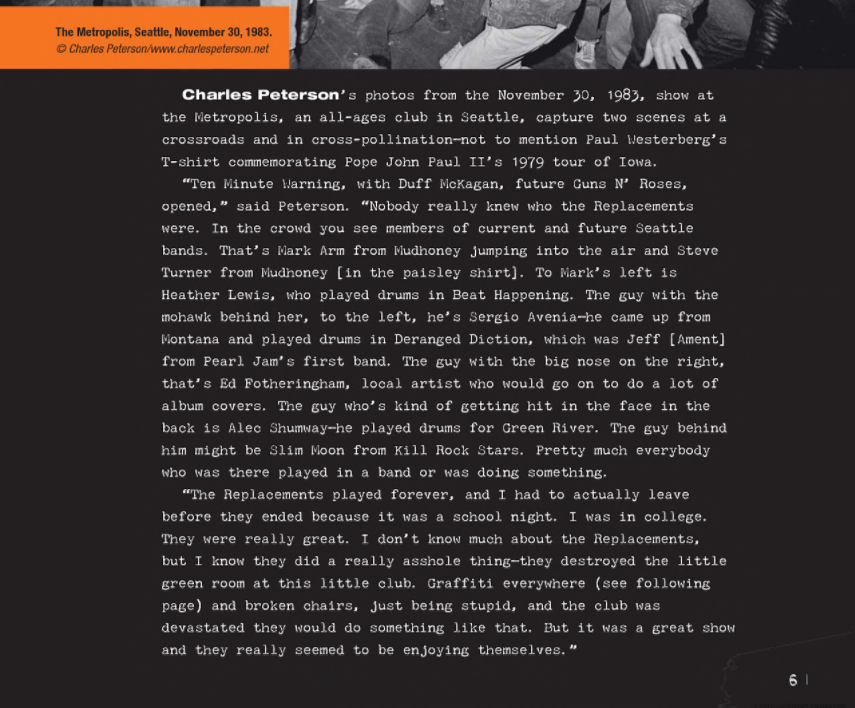 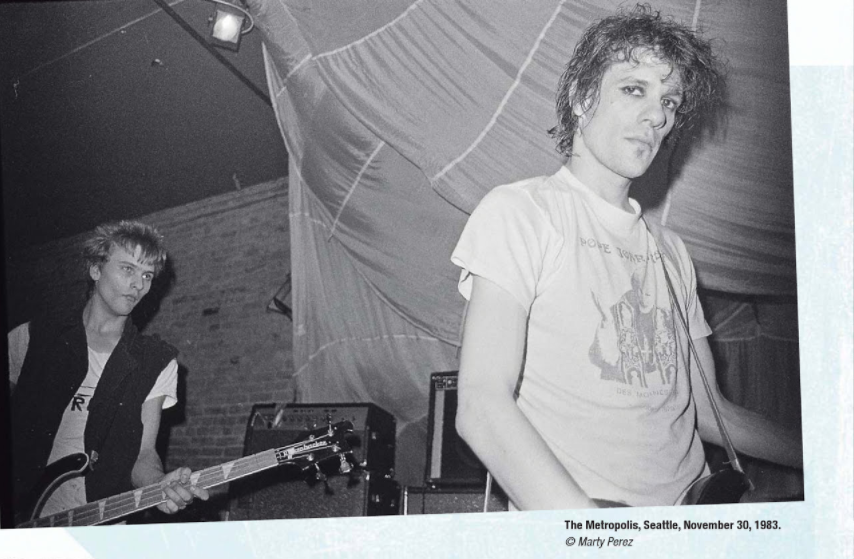 nice! "the scene" is so damn small. and in the end, it always ends like this: 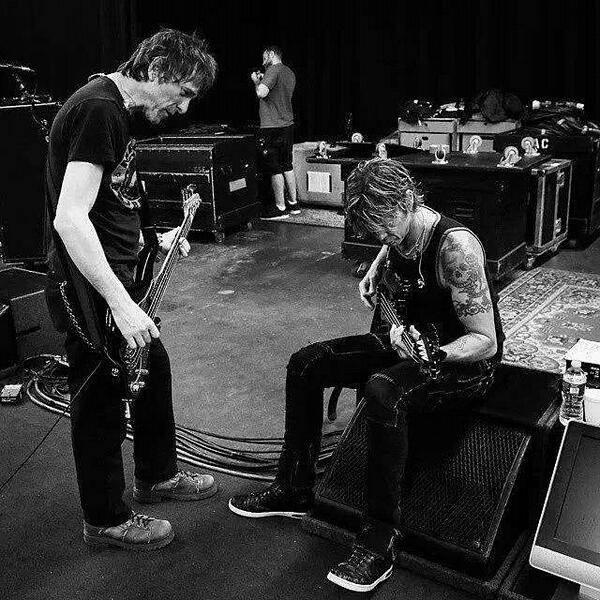 "river of deceit" and "wake up" are brutal listens.

Layne was smart. He didn't buy into all the goody goody nonsense about getting clean. yes you can technically get clean but the horrors of the addiction and the horrors that set you on that course in the first place still exist....which entices you back into the abyss.

Major addicts are not simply using to get high. They are using to bury secrets and unsavory aspects of their lives. Getting clean defeats the purpose. He understood this.

edit: I LOVE his false bravado in I'm Above. He knows the score, has his epiphany, yells it from the highest mountain, yet there is no actual escape.

Thanks for the essay. That must have taken a while, and it's appreciated.

I was doing a minimum-wage manual labor gig when the Iron Maiden/GNR tour came to Seattle. A guy I worked with said he was going, and I was tempted, but could not afford it. Obviously, I regret missing that opportunity to see the original lineup.

Layne became something of a myth after AIC broke up. You'd hear stories around King County, as if they were bigfoot sightings. Mostly details of how ill he'd become, and supposedly had lost some fingers due to heroin ruining his cardiovascular system.

If the band isn't talked about much today, it's probably because Layne's exit was so incredibly sad. Dirt is one of the best albums I've ever heard, but I have to be in a good mood to play it or it will pull me right down.