A&E Network announced that it has ordered 10 episodes of Bates Motel, the first new project from executive producer Carlton Cuse since Lost ended.

He'll be partnering with exec producer Kerry Ehrin (Friday Night Lights, Parenthood) on the show, slated to premiere in 2012.

Pre-production and casting will begin immediately on the series, which was inspired by Alfred Hitchcock's famous Psycho film.

It's being described as "a contemporary exploration of the formative years of Norman Bates' relationship with his mother, Norma, and the world they inhabit," says the release. "Viewers will have access to the dark, twisted backstory and learn first-hand how Norman helped forge the most famous serial killer of them all."

It's got a pretty big pedigree, coming from "Lost" producer Carlton Cuse.

Believe it or not, another attempt at a TV series, also called "Bates Motel" aired a pilot movie on ABC in 1987. It followed a character named Alex who was friends with Bates in the insane asylum. Bates dies and leaves Alex his home and the Bates Motel. Alex gets released and returns to Fairview, CA and re-opens the Bates Motel, and supernatural things happen.

A pilot movie was produced and aired, but received tons of criticism, especially from Anthony Perkins himself who asked fans to boycott the series, as did Hitchcock's surviving family. The pilot also had low ratings, and so it never went into production.

This new series is a concept based seemingly on the the plot to 1990's made-for-cable final film "Psycho IV: The Beginning" which has parts that are a prequel that explains Bates motives and the events leading up to the murder of the first film.

This new series will attempt on a weekly basis to be a prequel to the first film, and explain what made Bates, turn into "Norman Bates" of the first film.

Definitely interest. It's been YEARS since the original storyline of the Psycho films has been touched. Psycho as a franchise has been dead for years. It might be nice to see it revived on TV, if done right.

Yeah it would be great if done right...but I'd hate to see them make Norman into a loveable headcase like Dexter.

Speaking on the psycho franchise...I'm huge fan of Psycho 2....such a watchable sequel...expected it to be rubbish but it's actually quite atmospheric in parts.

Yeah I think Lofton is a pretty big fan of it too. I liked it, but I always had a thing for Psycho IV. I thought it was incredibly underrated.

Psycho III was really the only turd, but there were aspects to it that were awesome. Perkins' direction was incredibly atmospheric as was the cinematography, and I absolutely loved Carter Burwell's score. Best score of the sequels.

But the film was so out there, it was in-accessible and most parts sucked. Psycho II & IV were really the only accessible sequels to the original. And most people were grossed out by the incest angle in Psycho IV, but I thought it was incredibly plausible. I actually (and sadly) knew men who went through that psychosexual manipulation with their single parent mothers who substituted them for husbands... and the long-term psychological damage to them is INTENSE.

I love II and IV. IV is incredibly underrated. They could not have done a better job on the back story. This series has potential if done right.  They're gonna walk a fine line with this though. Cant veer off the already established path too much or we'll see a backlash which will kill it(Halloween and that Thorn bullshit).

I love II and IV. IV is incredibly underrated. They could not have done a better job on the back story. This series has potential if done right.  They're gonna walk a fine line with this though. Cant veer off the already established path too much or we'll see a backlash which will kill it(Halloween and that Thorn bullshit).

I always loved the Thorn aspect to Halloween 5 & 6 -- in concept.

Although taking and fictionally manipulating Rune and Druid mythology was a bit fantastical, I always gave them credit for trying.

Had it been executed properly, it did really tie in to Carpenter's earlier produced films with the first three Halloween's.

The whole "Samhain" vibe from Halloween II was back in ways, and with Alan Howarth's throwback (original score, only heard on the soundtrack and bootleg Producer's Cut), was a total throwback Halloween II meets Halloween III score.

"The feel" of Halloween was back in a big way... in concept.

Had the Weinstein's had the fucking BALLS to do what Daniel Farrands originally pitched, Halloween 6 could've been the most unique sequel of them all, and been a reboot of sorts to a sagging franchise in the grunge era that needed new life desperately.

Along with Howarth's throwback score, Farrands wanted even more volume turned up on the Halloween elements of the franchise, including more emphasis on the Thorn cult, and originally pitching them to cast Daniel O'Herlihy (Conal Cochran from Halloween III), as Dr. Wynn, Dr. Loomis' collegue and nemesis in the film, who leads the cult.

That would've been so cool had that happened. Basically a merging of the slasher aspect and a return of "The Shape", with the Halloween-mythology elements of Halloween III.

Of course none of these things happened, and the Thorn thing got botched to death, but to this day -- i'd much rather have Thorn-Michael Myers than the fuckin' redneck psycho in a Halloween mask bullshit Rob Zombie pulled. It was an attempt at a Dark Knight-Joker moment for him that totally backfired into retarded Zombie circle jerking. 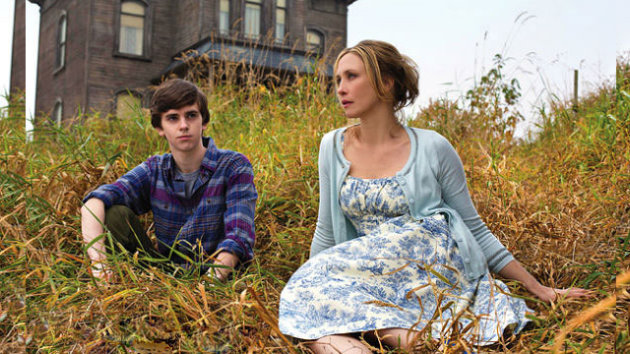 It was announced back in July that A&E had greenlit a new 10-episode series called Bates Motel, which would serve as a prequel to Alfred Hitchcock's classic, Psycho.

Now you can get your first look (via) at Finding Neverland's Freddie Highmore as a young Norman Bates and Vera Farmiga as his mean mother as their iconic house looms large in the background.

The series, executive produced by Carlton Cuse (Lost) and Kerry Ehrin (Friday Night Lights), will expand the universe beyond the hotel's rooms and showers, according to the showrunners. ''The town itself is very much a character in the show,'' Cuse tells EW.com. ''There are a lot of secrets that lurk beneath this bucolic veneer.''

Looks pretty Norman-esque. But them more and more I hear of the plot, plus more heavier involvement of the town of Fairview, CA... the more it sounds like a true second-attempt that the 1987 Bates Motel TV movie. The only difference is this is set in the 50's, and that one was set in 1987.

The plots sound almost identical, with the exception of the Psycho IV-twist of a young Norman being involved.