Reading the opinion, it's interesting how much Alito focuses on the arguments of McDonald and Heller as example of rights having historical acceptance and foundation in the country, while abortion was illegal in nearly every state and under common law until Roe was decided.  In short, those who believe the constitution doesn't provide an individual right to own a firearm but does confer an individual right to an abortion are pulling that statement out of thin air with no historical support.

On Page 23 the majority opinion also states that only one sex can give birth.  Very interested if this will be used in the inevitable court case that is spurred from Title IX and other efforts to attempt to make a distinction between sex and gender with no historical basis in common law or the American constitution.

The gender critical feminists were right... literally dead on balls accurate. I wish Reddit hadn't deleted the community a couple years ago so I could link you to those discussions.

I forgot her name but one of the leaders in that community had suggested feminists attempt to ally with the right in an effort to slow this down and potentially save feminism in the process before it's too late.

They perceived the right as the enemy while the lunatic fringe on the left pushed a Trojan horse through the heart of women's rights...and here we are.

The left must be jumping for joy because now they get to lay all the blame on the supreme court....while continuing their agenda....

Pay no attention to the man behind the curtain.

Damn those fascists for trampling on women's rights! Be outraged about that while we destroy what's left of Title IX!

This country is so fucked up.

And yeah....gay rights are next on tap. Once again, the feminists and the gay community were right...they started the "LGBdroptheT" movement until it also had to be stomped in its cradle. Predicted if you didn't distance the trans agenda from LGB...the gay community would lose decades of progress.

So enjoy your drag queen story hour and cheering on boys in girls track and field while abortion and God knows what else are tossed on the ash heap of history.

What a time to be alive.

Been reading a lot of people saying they’re leaving the country. These terms are acceptable.

The issue is that, like guns, progressives will have to compromise. They’ll have to agree to a 20 week abortion ban to pass federal abortion rights. Right now you can have an abortion up until birth and still allow a baby to die if it survives and but delivered— the whole Virginia controversy where the governor said they’d let the baby die but keep it comfortable. No other nation in the world allows it.

I read the entire opinion, and I think Roberts was right. Clearly “viability” is a bullshit standard that isn’t used in any other western nation and has no basis in the constitution. But the majority were wrong to strike down Roe.

I think a good compromise for congress would be the 15 week ban with support from Medicaid, and an upper limit of 22-23 weeks at state’s discretion in all instances but severe risk to the mother.  Both sides are giving up something, and we’re in line with most of Europe who has even stronger limitations than the one I described.

But Democrats care so much, they’ll never even consider this, and Republicans are too fucking stupid to realize the long term impacts of this on so many levels.

The majority’s opinion is sound and thorough, but as Roberts said, their job was to determine if Mississippi’s 15 week ban was unconstitutional. Only when they showed up in court did they argue Roe should be overturned.

The majority got this wrong.

“What the Supreme Court just did was that they chose to endanger the lives of all women and all birthing people in this country.”

This is exactly what I was talking about above. Even though this is a huge issue for women, gotta remind everyone that men are women too(and women are men) and women are only "birthing" people.

Women are under attack by both sides and the sooner they can admit this, the better.

If they could play their cards right, they might be able to prevent the coming red tsunami...but they won't.

She's also screaming for people to take to the streets and how this is "illegitimate".

Kinda funny how there's all these hearings about an insurrection while doing this.

Democrats singing God Bless America on the steps of the Capitol.... 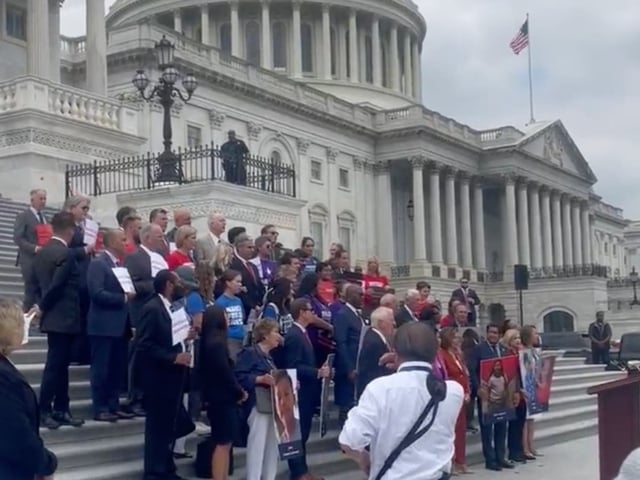 Who in the living hell thought that was a good idea?!?

They’ve held all three branches of government TWICE recently, and hold it currently. All they have to do is pass an amendment.

They’ve held all three branches of government TWICE recently, and hold it currently. All they have to do is pass an amendment.

Yea, but that’s like saying we could live on mars if we can get there. Getting there is the hard part. Any party passing a contested amendment as abortion would be, isn’t going to happen unless a significant social revolution occurs.

Democrats should be criticized for attempting to pass abortion on demand until 40 weeks, but I don’t think they could have gotten GOP support for anything prior to today. Maybe not even after today.

Like guns, it would have to involve a compromise. If you agreed to a twenty week ban while forbidding states from banning anything before 15 weeks, I think that could pass.

Republicans will not win the presidency without Barstool Republicans. They’ll simply be a niche party of right wingers.

This is my last tweet on this.  I honestly think the Republicans we’re gonna win the White House in a landslide cause of how pathetic the Biden administration is.  But I do think think this will bail the Dems out.   It sucks for everybody.