Notice: We are currently in the process of upgrading our discography system. Please view the new Bumblefoot discography which currently features 44 discs. Ron was born on September 25, 1969 in New York and started studying music at age 7 and began privately teaching music at age 13. By 19 he was teaching at local music stores and schools in NYC and NJ. In his early 20's, Ron set up and ran the music department at a private school in NJ, included music for children, music history, music theory, gospel choir, jazz band, and instrument lessons (also set up a darkroom and taught photography and film developing.) Since 2003, he's been a Professor at SUNY Purchase, teaching music production. Ron has even done musical teaching clinics across America, Europe and Japan.

Since the early 90's Ron has released 8 full length albums, a live DVD, numerous appearances on comp CDs and as a guest performer on many other albums. additionally he has been on the cover of magazines, and has toured internationally on his own and with festivals. In his solo carreer Ron has played every conceivable role from singer/songwriter to booking agent to accountant.

Besides his solo career Ron has worked as a songwriter for other artists, for TV jingles, theme songs and background music such as "MXC", "VH1's That Metal Show", Oxygen Network, Smallville, Red Bull's Air Race TV series, and on MTV/VH1's Hogan Knows Best, Real World, Pimp My Ride, Osbournes, Made, Date My Mom, Road Rules, Extreme Elimination, You've Got A Friend, Clone High, Sausage Factory, Power Girls, and many others more.  He's also written for classical instruments and orchestras and has been hired by bands/labels for the past 20 years as a producer and engineer in many genres of music (pop, R&B, hip-hop, funk, disco, electronic, classical, opera, blues, folk, jazz, swing, Latin, Middle-Eastern, new-age, lounge, rock, progressive, industrial, metal, 40's, 50's, 60's, 70's, 80's retro), Some of this work with other bands is carried out in his own recording studio in NJ, where also records his own music.

Ron has worked as a hired guitarist, bassist and singer for recordings and live performances.  He has been a guest on stage with Nancy Sinatra, Cyndi Lauper, Turkish composer Fahir Atakoglu, laid guitar tracks for Jessica Simpson, and has even played on stage with Joe Satriani.

In 2006 Ron joined Guns N' Roses on a recommendation to Axl from Joe.  Since joining the band they have played shows in 27 countries.  Ron appears on all tracks on Guns N Roses' "Chinese Democracy" album.

Making music has a greater purpose - anything I can do to help others, I try to do.   MS Research Foundation, Board of Directors - non-profit 501(c)(3) org that raises money for Multiple Sclerosis research. I help organize and run annual dinner/comedy fundraising shows, have also done benefit concerts to raise MS research money.   Released a CD in late 2001, donated 100% profits to the Red Cross.  Donated songs and performances to fundraising CDs, often donating autographed CDs, shirts, photos for charitable auctions.    Co-organizing and performing at a series of fundraising concerts "Rock Against Diabetes" - first one is in Vegas on Aug 22/23 '08, with an All Star band I put together - includes members from The Cult, Thin Lizzy, American Idol, Rockstar INXS/Supernova, Opiate For the Masses...   plenty more in the works.

Info used with permission from http://www.bumblefoot.com

If you have information you'd like to see posted in Ron's bio please reply below. 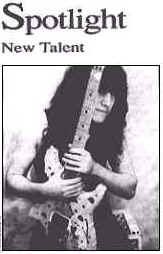 Inspired by Kiss at age six, Ron says his earliest musical goal was to play like Gene Simmons if someone decided to do a Kiss version of Beatlemania.  At the time his hands were too small for bass, so he focused his attention on guitar.  By eight he was covering Led Zeppelin tunes at block parties and even played a hotel in the Catskills.  He began playing copy tunes in clubs just five years later, and then focused on creating original material on his home 8-track.  Currently Ron solos and sings for the New York-based group Legend.  He recently entered the Sam Ash Guitar Solo Contest, played a spontaneous solo, and walked off with first prize.

Thal's demo tape is amongst the most impressive I've ever received.  It contains elements of classical, blues, and jazz, and at times reminds me of Frank Zappa.  His transcriptions are most impressive and detailed, so fans of hot transcriptions might be interested in seeing these musical masterpieces on paper.  With its clever melodies, contrapuntal lines, intricate rhythms, and ultra-complex ensemble sections, Ron's sheer musicality will surely gain him much acclaim.